Skip to content
Perhaps we can no more dispense with myth than we can with words. In dreams we are carried in the currents of myth. Mythic forms persist as binding and constitutive elements within language and culture; through the imagination they can be invoked or awakened from their latency within memory, within the unconscious. 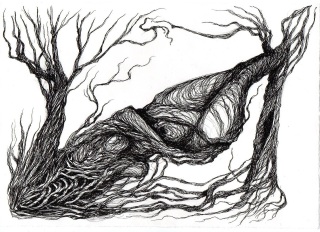 A key desire in my art is exploring where an image will take me; how it will unexpectedly evolve, leading me on the secret pathways of untold stories. As unforeseen associations and recurring symbols are revealed with each drawing, I find myself obsessively unearthing and piecing together a mythology that curiously knows how to speak intimately to me, and like an imaginary childhood friend takes the shape of my fears, my wishes and my memories.
A prevailing assumption envisages human experience in Cartesian terms, wrongly de-limiting the unconscious as if it is sectioned from the conscious mind, the body and the world, reducing the unconscious to an estranged shadow within. Yet the unconscious is not only a repository, is not only something that contains, conceals or confines but can be responsive, becoming a way of reaching outwards to grasp, unveil and enchant the world we experience. In a sense the unconscious surrounds us, waiting in the world’s forms and in our encounters with others. 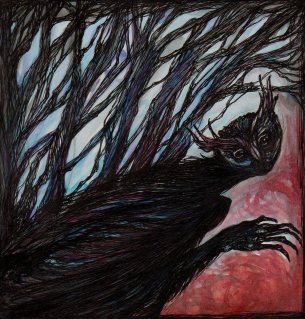 For me, drawing has become a process of revelation that is essentially to do with memory and the unconscious mind; my interest in drawing began in childhood with a love of comics and a fascination with monsters and mythology. As a child I recall chancing upon visionary and apocalyptic paintings by Bosch and Brueghel in an encyclopaedia with the sensation of having crossed a line, trespassing on forbidden territory. Perhaps in childhood play there was the kernel of revelation I was to nurture later, in the poetry of the image. 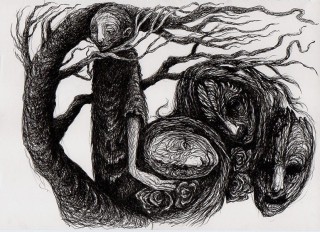 The poetic image is a threshold where unexpected forms appear like messengers, leaving us speechless. This experience of seeing is often one of being silenced. In the gaze that ruptures speech signs take shape before us as seductive apparitions, curious interlopers or unwelcome guests. There is a dialogue, a dialectic communion, an exchange of glances between the visible and the invisible, between the present and the absent, the conscious and the unconscious. When we experience, we imagine. 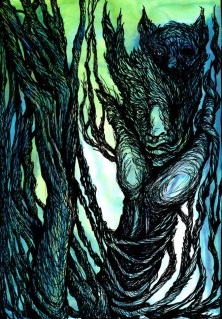 Somewhere between reflection and chance the image emerges. A face is slowly coaxed to surface from the patterns of an ink wash. The image is a mirror; we find ourselves changed in its flickering contours. The act of drawing is a form of gnosis, of self-knowledge, of scrying into patterns, peering into hidden facets, a kind of meditative dream while awake. In drawing I’m lured into the image’s circle of influence, witnessing and participating in its transformations. 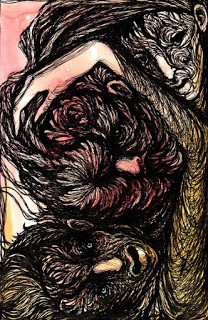 Affinities with alchemical and magical ideas and images have inspired and informed my understanding and process. In these drawings as in dreams mythic forms emerge through memory and as we remember we in turn cross thresholds, we take on different forms, wear other masks. On the other side we glimpse monstrous lives, encounter spectral doubles, phantoms of resemblance roaming lost margins steeped in fog or shadow. The personae and encounters in these pictures act out dramas on the stage of an inner theatre, a microcosm of the page where Faust enters to converse with his shadows. So the image becomes a hermetic riddle and the act of drawing a method of unravelling its many threads; a visual poem, a disturbance in habitual thinking where time is transmuted and the image stirs into life.
All images are copyright: Stephen J. Clark (2013, 2014, 2015). Text copyright Stephen J. Clark (2017).